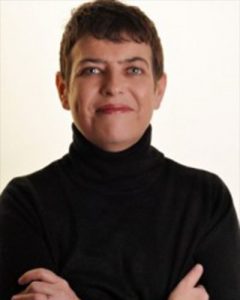 Annemarie has always combined her professional theatre work with a regular timetable of teaching. On leaving Middlesex Polytechnic in 1989 she was invited back the following academic year to lead the degree module “The Singer as Entertainer”. She went on to develop the module and co-devised the first year popular contemporary arts module “The Musical”.

From 1995 – 2000 Annemarie was the Head of Music at the Hertford Regional College developing and teaching the BTEC National Diploma programme for the college, whilst teaching on the A Level Theatre Studies Course.

From 1989 – 2007 Annemarie worked at the Hertfordshire Theatre School, initially as one of their singing teachers/MD, until getting promoted in 2000 to the Head of Musical Theatre and Singing.

From 2007 – 2008 Annemarie was Head of Musical Theatre at Reynolds Performing Arts.

In 2009 Annemarie opened The MTA In 2012 this was named as The School of the Year in The Stage 100 Awards and named as a ‘new force for drama training in the UK’. It has continued to be a market leader in its thinking an innovative delivering from offering the UK’s 1st 2 year accelerated learning programme to being the first Musical Theatre course in the country to split the focus of its acting component equally between stage and screen. In 2017 it was named as The Stage School of the Year for an unprecedented 2nd time.

As a workshop leader she has worked for companies such as the Non-Stop Workshop, NYMT, YMT:UK, Theatre Royal Bath, Young Vic, to name just a few.

Singer as Entertainer: A module on the infamous BAPA course, SAE ran for a semester. Looking at performance techniques for todays singers in musical theatre, cabaret and TV. The module was divided into three parts:

The module was assessed by the HE Ofsted equivalent during Annemarie’s time there, and was one of only two modules on the entire BAPA course to receive a high recommendation.

The Musical: This was a first year contemporary arts project co-run with the dancer/choreographer Catherine Pickering. The module, running for one semester was set up as an introduction to contemporary musical theatre. Through analysis and performance the students studied the various landmarks that had shaped musical theatre through the decades, concluding in a 40 minute performance of key pieces.

Employed to oversee the introduction of the BTEC National Diploma at the college (up until this point the college had only offered A Levels). Whilst at HRC Annemarie taught on both the BTEC and A Level Theatre Studies syllabus. On the A Level course Annemarie taught on the practitioner and critical studies sections of the syllabus. The BTEC course that she developed concentrated on singing, both technical and performance, theory and basic composition. The culmination of the course at the end of the two years was an outside event featuring music created and performed by the young people – this included teaching a very (very) basic level of competency on keyboard, drums, guitar and bass

Initially hired as one of the technical singing teachers and college MD, Annemarie eventually ran the Musical Theatre side of the course. Having worked at HTS since it started she quickly developed an affinity with this small, vocational training school, regularly MD’ing’ their annual musical and West End Showcase. in 2000 with the advent of a new principal Annemarie restructured the course, helping to make it an established training institution in the field of musical theatre. As one of the more senior members of staff Annemarie was also heavily involved in the pastoral care of the students at the college too.

Employed when the college started to offer a foundation degree in Musical Theatre in conjunction with Trinity College of Music. Responsible for structuring the musical theatre and singing side of the new Reynolds diploma in performing arts.

2009 – to date The MTA – The Musical Theatre Academy Principal/CEO

The MTA was founded by Annemarie in 2009, and was turned into a charity in 2012. Fortunately the charity kept her on, and she is still the Principal. Offering the UK’s first and only accelerated learning programme for Musical Theatre performers in the UK.

Annemarie is in constant demand for her work with young people, particularly teenagers. She was involved with several projects for the National Youth Music Theatre Company, including a series of workshops in Japan, introducing their young people to some of the ideas/practices of western musical theatre. She is a founder member of Youth Music Theatre:UK, regularly running Studio projects for them all around the UK. In 2004 she was the MD for the critically acclaimed Theatre Royal Bath’s annual “Storm On The Lawn” – MD’ing’ and arranging My Fair Lady for 60 young people aged 11 – 18.

Her community theatre work includes a workshop for Sadlers Wells for elderly people interested in the arts and a project for the Young Vic working with adults with mental health issues, creating a piece of work for “Bonkersfest”

With both her teaching and professional work co-existing so smoothly it is no wonder that Annemarie’s masterclasses are much sought after. Clients have included YMT:UK, and the Young Vic Centerstage programme, both of whom have brought her in as a consultant for those young people wanting to know the best audition advice for getting into drama college.

Given Annemarie’s wealth of knowledge from FE to HE and in more recent years to actually starting an award winning college from scratch, she is in much demand as a consultant to other colleges/courses. Sometimes a fresh eye can spot the most obvious problems that can instantly turn a struggling course around. It’s surprising what difference can be made in just one day if you’re up for a challenge and you want to make a change. Annemarie is an experienced motivational speaker who can give you the confidence to ‘see the changes’ and the tools to make the changes. If you know that your course isn’t working but you don’t know why then a one off consultancy is definitely a valuable investment that will pay you back handsomely IF you’re prepared to be challenged!

If you are interested in booking Annemarie for a masterclass, lecture, consultancy or any educational/community project please contact her directly at AnnemarieLThomas@aol.com